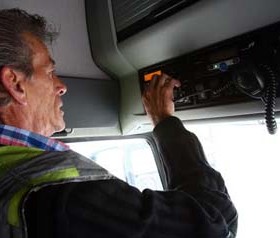 on Jul 31, 13 • by John • with Comments Off on RSA issues Driver fatigue warning


New survey findings released by the Road Safety Authority  show that almost two thirds of drivers (60%) attempt to fight tiredness while driving through ineffective means such as opening windows, singing or talking to themselves and turning on the radio. The findings come as the RSA, An Garda Síochána and...
Pin It

New survey findings released by the Road Safety Authority  show that almost two thirds of drivers (60%) attempt to fight tiredness while driving through ineffective means such as opening windows, singing or talking to themselves and turning on the radio.

The findings come as the RSA, An Garda Síochána and Applegreen launched a campaign this Bank Holiday weekend aimed at highlighting the dangers of driver fatigue. On Friday 2nd August Applegreen will provide free cups of coffee to drivers between 2pm and 8pm at 17 participating service stations around the country.

Drivers simply mention the ‘RSA’ to the till operator and they will receive a free cup of coffee on Friday to ensure they get to their destination safely.

Commenting ahead of the August Bank Holiday Weekend the Minister for Transport Tourism and Sport, Mr. Leo Varadkar T.D., urged road users to be extra vigilant. “Five people lost their lives over the June Bank Holiday weekend. We should all redouble our efforts to avoid a repeat this bank holiday. If you feel tired, then pull over and take a break. We are also asking drivers this weekend to watch out for changeable road conditions with the changing weather. Please enjoy the weekend, but do so safely.”

Noel Brett, Chief Executive of the Road Safety Authority said; “We are delighted that Applegreen has joined with us on this Driver Reviver campaign. The company is making a very practical and worthwhile contribution to road safety and I would urge drivers, particularly any who are feeling tired to avail of their offer of free coffee on Friday. As with every bank holiday weekend, there are added risks when using our roads. More people will be taking to the roads, travelling long distances, often without breaks. Scientific studies show that if a driver persists in fighting sleep while driving, the impairment level is the same as driving while over the drink drive limit.”

“To drivers we say; if you are fighting sleep at the wheel, stop immediately. If you can, drink a cup of coffee or caffeine drink but most importantly take a 15 to 20 minute nap. Following the nap stretch your legs and get some fresh air. By following this advice you should be able to drive for another hour or more.”

Unfortunately, this new research indicates that a third of drivers (31%) respond to feeling sleepy while driving by opening the window, 12.6% said they stretched their legs, 8% reported that they sing or talk to themselves or a passenger and 5% said they turned on the radio. None of these help in combating driver fatigue. In fact, these are the people who are most at risk of being involved in a driver fatigue related crash. Never drive if you are fighting sleep or you may never wake up.” continued Mr. Brett.

The Director of Operations in Applegreen, Joe Barrett said: “We are delighted to contribute to the road safety effort in this country by running a Driver Reviver campaign on Friday 2nd August. All drivers have to do is mention the RSA to the till operator at any one of the 17 Applegreen participating stations and they will get a free cup of coffee! Signage at the coffee machines will remind drivers to avail of this offer this Friday 2nd August from 2pm – 8pm. Everyone at Applegreen is delighted to support the RSA, An Garda Síochána and all other state agencies involved in reducing traffic collisions on our roads.”

Commenting on the Garda Roads Policing Plan for the Bank Holiday Weekend, Assistant Commissioner Gerard Philips said, “Tragically five lives were lost over the recent June Bank Holiday weekend. To prevent further loss of life this bank holiday period members of the Garda Traffic Corps will be out in force targeting all aspects of road traffic enforcement with particular emphasis on speeding, drink and drug driving, non wearing of seatbelts, mobile phones use and reckless driving.”

Commissioner Phillips added:- “I would have a particular message for motorcycle riders who have featured too prominently in road collision casualty figures recently. Tragically 17 motorcyclists have already been killed this year compared to 16 in total for 2012. Our message is simple. Please be aware that you are considerably more vulnerable on a motorcycle, slow down and don’t take chances, such as reckless overtaking, undertaking or filtering. Drivers too, need to be aware of their blind spots and be constantly on the look out for motorcycles at junctions and especially when turning right.