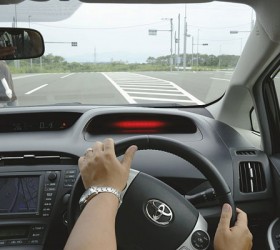 on Oct 15, 13 • by John • with Comments Off on Carmaker works to reduce pedestrian collisions


Carmaker, Toyota has revealed two new integrated safety systems designed to reduce the risk of pedestrian collisions and deliver safer driving in traffic, both of which will be brought to market in the next few years. It has developed a new auto-steering function for its Pre-Collision System, which works in...
Pin It

Carmaker, Toyota has revealed two new integrated safety systems designed to reduce the risk of pedestrian collisions and deliver safer driving in traffic, both of which will be brought to market in the next few years. 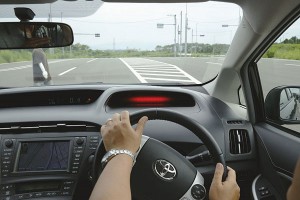 It has developed a new auto-steering function for its Pre-Collision System, which works in conjunction with automatic braking to help the driver avoid an impact, and Automated Highway Driving Assist, a system which keeps the car on an optimum driving line and a safe distance from the vehicle in front.

Just a few years ago the only course of action for a driver faced with a pedestrian in his path would be to stamp on the footbrake, wrench the steering wheel and hope for the best.

Successive advances in braking technology, such as ABS, emergency braking and brakeforce distribution have increased the chances of avoiding impact. While these have become standard features of today’s mainstream cars, Toyota achieved a step-change in preventive safety with the introduction of its Pre-Collision System. This uses radar detection to spot pedestrians and other hazards, by and day by night, and initiate alerts and automatic braking to cut the risk of an accident.

Toyota has now added an extra dimension to this technology with automatic steering, a feature it believes will help prevent collisions in cases where automatic braking alone is insufficient, for example when the vehicle is moving too fast, or a pedestrian steps suddenly into its path.

PCS uses an on-board sensor to detect a pedestrian in the vehicle’s path. If it determines there is a collision risk, it triggers a warning light on the dashboard, immediately in front of the driver; if the likelihood of an impact increases, it sounds an alarm to warn the driver to take avoiding action and initiates pre-collision braking force and automatic braking.

If the system detects that a collision cannot be avoided by braking alone, and there is sufficient room for avoidance, it activates steer assist to direct the vehicle away from the pedestrian.

In 2012 Toyota introduced the system with increased pre-collision braking force and automatic braking in the Lexus LS 600h, It aims to make the technology more affordable and more widely available in its model ranges by 2015, prior to bringing the PCS with Pedestrian-avoidance Steer Assist to the market.

The system links two driving technologies to help secure safer driving and reduce the workload on the driver: Co-operative-adaptive Cruise Control, which communicates wirelessly with vehicles ahead to maintain a safe distance; and Lane Trace Control, which helps steer the vehicle on an optimal driving line within a traffic lane.

Toyota recognises that it is important for the driver to be in ultimate control of a vehicle, so its intention is to introduce AHDA and other advanced driving support systems with which the driver remains in command, and there is no compromise in driving pleasure. It proposes to market AHDA from the mid-2010s together with other systems that can make driving safer and more secure.

Toyota is presenting its new technology at the Intelligent Transport Systems World Congress in Tokyo next week (14 to 18 October), and will begin road trials on Japan’s Shuto Expressway from 15 October.

Co-operative Adaptive Cruise Control: unlike standard radar cruise control which uses millimetre-wave radar to detect other vehicles, Co-operative Adaptive Cruise Control uses 700-Mhz band vehicle-to-vehicle ITS communications to acquire acceleration and deceleration data from the vehicle ahead. This allows the speed of the following vehicle to be adjusted accordingly and better maintain an appropriate distance. By reducing unnecessary acceleration and deceleration, it improves fuel efficiency and helps reduce traffic congestions.

To bring its new driving support systems to market as soon as practicable, Toyota is making use of new component technologies and know how gained through road testing using its advanced active safety research vehicle, unveiled last January at the International CES electronics show in Nevada.

Based on a Lexus LS, this vehicle is being used for Toyota’s Integrated Safety Management Concept* research at the Toyota Research Institute of North America, in Saline, Michigan. Capable of being driven autonomously, it is fitted with forward-facing cameras to detect traffic signals, and front-mounted sensors to detect vehicles, pedestrians and obstacles. These sensors also allow traffic conditions and road layouts in the car’s vicinity to be assessed, such as intersections and merging lanes.

This research into fundamental technologies is aimed at helping drivers select the safest possible routes.

Toyota has been researching automated driving technologies since the second half of the 1990s, and has been conducting public road tests in the USA for a number of years. It has also been road-testing its next-generation Intelligent Driver-support System in Japan for around two years.

Using insights gained from these research activities, Toyota is working to optimises its systems for safer driving and to move close to the ultimate goal of eliminating traffic deaths and injuries.

Toyota is also taking into account the fact people are living and remaining active for much longer, developing technology that will support older drivers with recognition, decision making and vehicle operation so that they can remain mobile and lead fuller lives. Toyota is also working to create more stable driving environments that will help alleviate congestion, and thus reduce economic losses and carbon emissions.

* This “concept” does not refer to individual safety systems on the car, but integration of these systems to offer the best driving support at all stages, from parking to normal operation, the moments before and after a collision, and even collision avoidance at the moment of an accident.