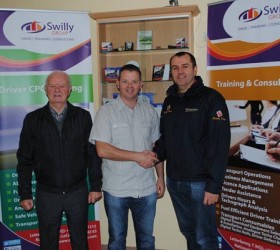 on Nov 6, 13 • by John • with Comments Off on Swilly Group offers Transport Manager CPC training


The Swilly Group is now recruiting for the next Transport Managers’ CPC course begins on Monday November 18th 2013. The Transport Managers CPC is a qualification required by persons managing a passenger or freight transport company. Donegal’s leading transport training company, continues to lead the way nationally...
Pin It

The Swilly Group is now recruiting for the next Transport Managers’ CPC course begins on Monday November 18th 2013. The Transport Managers CPC is a qualification required by persons managing a passenger or freight transport company. 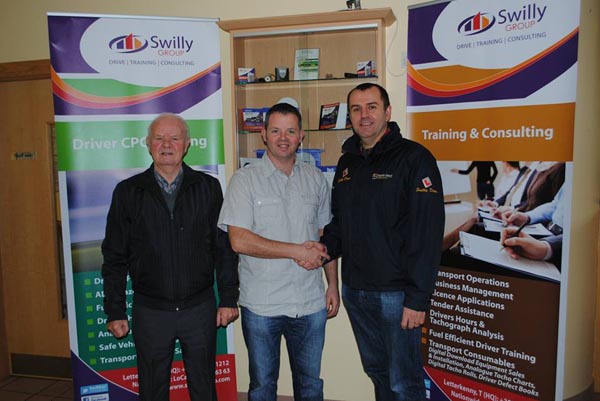 Feda O’Donnell & Brian O’Donnell of Bus Feda are congratulated by Brian Sweeney, MD of the Swilly Group, on Brian’s achievement of scoring the highest marks in Ireland in 2013 in the Chartered Institute of Logistics & Transport (CILT) Transport Manager CPC exams. Brian studied for the course with the Swilly Group in Letterkenny.

Donegal’s leading transport training company, continues to lead the way nationally with its students achieving national awards on the Transport Managers CPC course. The Swilly Group has achieved an unprecedented 100 per cent pass rate in the Transport Manager CPC exams for the last three years running. Exams are held each year in January, June and September.

Continuing this trend into 2014, three Swilly Group students have achieved the highest marks nationally in the Haulage and Passenger transport exams. Brian O’Donnell of Feda O’Donnell Coach Hire in Ranafast achieved the highest score nationally in 2013 and will receive an award from the Chartered Institute of Logistics & Transport in Dublin at the Irish Logistics & Transport Awards in March 2014. That will complete a hat-trick for the Swilly Group and Donegal.

“We have been delighted with the results our learners have been achieving”, said Brian Sweeney, Managing Director of the Swilly Group. “The quality of training that we provide has been second to none and the results our students have achieved has shown this. This is primarily due to the diligent work and the endless hours of tuition our CPC tutors provide.”

Any licensed Haulier or Bus Operator must hold, or employ someone who holds, the Transport Manager CPC qualification. With the RSA now responsible for policing of commercial haulage and bus operations and many prosecutions now going through the courts, it has become vital that companies, not alone remain compliant, but also that they have staff who are up to date on the most current legislation. Also, with the announcement of the fuel rebate in last year’s budget for compliant bus and lorry operators, the demand for suitably qualified Transport Managers is growing.