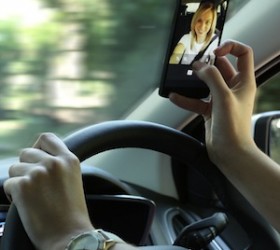 1 in 4 young drivers have taken selfie while driving

on Aug 6, 14 • by John • with Comments Off on 1 in 4 young drivers have taken selfie while driving


From the World Cup-winning German football team, to Barack Obama, to the Pope, nearly everyone it seems has been caught up in the incredible rise of the “selfie” – self-portraits snapped from smartphones. But a new Ford-sponsored survey reveals that one in four young people in Europe have taken a “selfie”...
Pin It

From the World Cup-winning German football team, to Barack Obama, to the Pope, nearly everyone it seems has been caught up in the incredible rise of the “selfie” – self-portraits snapped from smartphones. 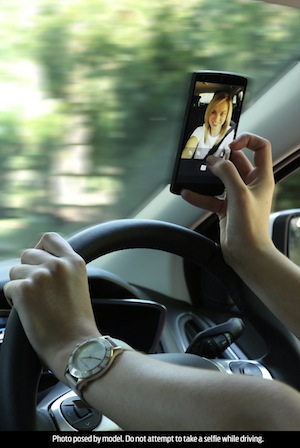 But a new Ford-sponsored survey reveals that one in four young people in Europe have taken a “selfie” while driving – a highly distracting activity – and nearly half of young drivers admit to having used their smartphone to snap a photograph behind the wheel.

The survey of 7,000 smartphone users aged 18-24 from across Europe also showed one in four people have used social media sites behind the wheel; and that young male drivers were the most likely to ignore the risks. Nearly all drivers surveyed agreed the activities were dangerous.

Car crashes are the leading cause of death for young drivers and Ford last year introduced to Europe the award-winning Ford Driving Skills for Life programme to provide hands-on training to more than 5,000 18-24-year-olds and online training for thousands more. The company is now expanding the programme to include the dangers of taking a “selfie” and other smartphone and social media activities behind the wheel.

“Taking a ‘selfie’ on a smartphone has for many young people quickly become an integral part of everyday life – but it’s the last thing you should be doing behind the wheel of a car,” said Jim Graham, manager, Ford Driving Skills for Life. “It is deeply worrying that so many young drivers admit to taking a photo while driving and we will be doing all we can to highlight the potential dangers through driver education.”

There have this year been a number of car accidents resulting in injury and even death where drivers are reported to have taken “selfies” shortly before tragedy struck. The publication of driving “selfies” to social media channels has given rise to hashtags, which draw attention to posts, such as #drivingselfie.

Ford has found that snapping a “selfie” at the wheel can distract a driver for 14 seconds, and checking social media channels can distract for 20 seconds – long enough for a car travelling at 100 km/h (62 mph) to cover the length of five football pitches.

According to research carried out in North America by the National Highway Traffic Safety Administration (NHTSA), adjusting hair using a rear-view mirror can distract for four seconds, and dialling a hand-held phone can distract for seven seconds.

Ford Driving Skills for Life was launched in the U.S. 10 years ago and has provided hands-on training to more than 100,000 young drivers around the world. So far in Europe, the programme has been rolled out in Belgium, France, Germany, Italy, Romania, Spain, and the U.K.

As part of the training, attendees will in the future undertake slow speed manoeuvres while taking a “selfie” on a closed facility with a professional instructor beside them at the wheel. Expert guidance also is provided in the importance of early hazard recognition, and good speed and space management.

“The students can be a little blasé at first but afterwards, when they see the cones that have been flattened as they tried to take a ‘selfie’, it brings home the message very effectively,” Graham added. “The potential consequences of taking a ‘selfie’ behind the wheel are very sobering, and it is crucial to get that message home to young drivers as effectively as possible.”

A previous survey of young drivers conducted by Ford last year showed that most had driven in excess of the speed limit; almost half ate or drank at the wheel; and 40 per cent had used a mobile phone while driving.

Ford ‘Selfie’ video and animation assets are available on the following links: